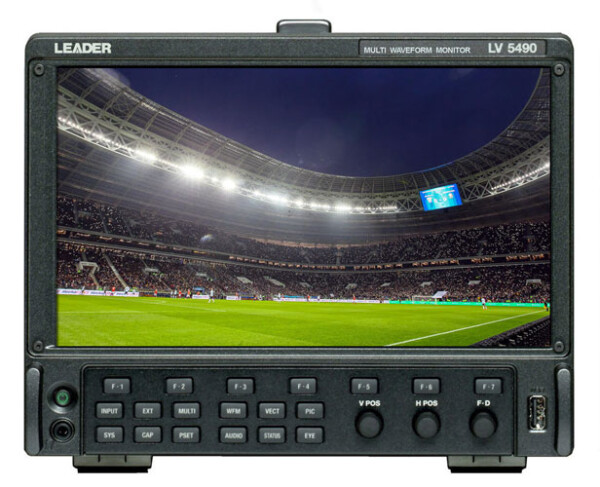 “The LV5490 has established itself as the preferred choice of many broadcasters and major OB companies covering large scale events such as the current football tournaments from Russia,” says Leader’s European Regional Development Manager, Kevin Salvidge.

“LV5490 instruments were fielded at the beginning of the year for one of the biggest OB projects in the 2018 sports calendar, also at the UHD-HDR Bundesliga tests in Germany and most recently for broadcast coverage of a major-league football final from the NSC Olimpiyskiy stadium in Kiev.

“4K coverage of the latest tournament commenced with the opening match which saw Russia’s five-nil win against Saudi Arabia at the Moscow Luzhniki stadium.

“A total of 28 games will be covered in 4K, up to and including the final on July 15. UHD transmissions are being carried by a number of broadcasters and telco providers on dedicated 4K feeds as well as via satellite.”

Leader’s LV5490 offers 4K, UHD, 3G, HD and SD test and measurement features in a half-rack-width by 4U portable unit with a high definition 9 inch front-panel monitor. It provides all the capabilities needed to implement the full potential of high dynamic range in both HD and UHD.

The LV5490 supports preconfigured settings to ensure the reference levels are correct for both HLG and Dolby PQ production. A 75% HLG or 58% PQ marker is also displayed automatically on the waveform monitor graticule. This represents the reference level, enabling the vision engineer to ensure that any object placed at the centre of interest within a scene occupies the appropriate signal range and that sufficient headroom is reserved for specular highlights.

Supplementing its front-panel display, the LV5490 provides 1920 x 1080 HD DVI and HD-SDI feeds for connection to external monitors. Simultaneous viewing of up to four 3 gigabit/s SDI inputs is possible, including overlays. The size and location of individual channels can be adjusted on the display using a USB pointer so the user is not limited to fixed-size quadrants. Operators can select the size and position of the measuring area as well as the Y/G/B/R component channel. An alarm can be set to alert operators if the noise level exceeds a predefined threshold. An integral low-pass filter allows elements of the high frequency band to be removed at the time of noise measurement.